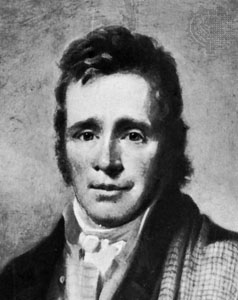 James Hogg (1770-1835), also known as ‘The Ettrick Shepherd’, lived and worked for most of his life in Ettrick Forest in the Scottish Borders. He is best known for his innovative novel The Private Memoirs and Confessions of a Justified Sinner (1824).

Seeing Robert Burns (1759-96) as a writer who gave expression to the experiences, insights, concerns, and traditions of the people of rural Scotland, Hogg set out to become Burns’s successor in that role. Neither man was a naïve rustic, however. Although speaking for and from the people, both were in fruitful contact with the intellectual and literary life of the Scottish capital, Edinburgh, which during their lifetimes was one of the major cultural centres of Europe.

Hogg is often associated with the Blackwood’s ‘Noctes Ambrosianae’ circle, and especially with John Wilson. His admirers range from Byron to Andre Gide, and his influence on later Scottish writers has been immense, from Robert Louis Stevenson to Muriel Spark and beyond. Ballads from Hogg’s family, and collected by the writer, appear in Walter Scott’s Minstrelsy of the Scottish Border, and Hogg’s Familiar Anecdotes of Sir Walter Scott provides an insightful portrait of the enduring (if at times fraught) friendship between these two major authors.

For a concise account of Hogg’s life, see the entry on him by Douglas S. Mack in the Oxford Dictionary of National Biography (Oxford, 2004).

The James Hogg Society was founded in 1981 to encourage the study of the life and writings of James Hogg, the Ettrick Shepherd (1770-1835), and to bring together all those interested in him.

The Society holds biennial conferences, bringing together international admirers of Hogg to reassess his work.