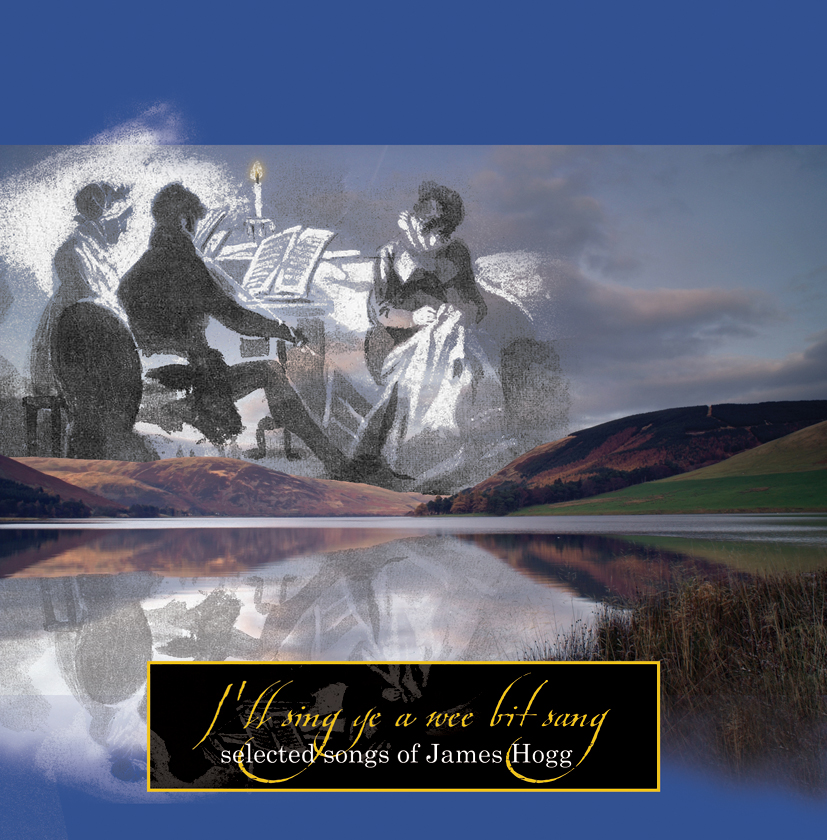 Use links to the songs below to stream or download them.

This CD was created as part of a research project funded by the Arts and Humanities Research Council (AHRC) to disseminate new information about the Scottish writer James Hogg (1770-1835). Hogg is probably best known for his prose works, most especially for The Private Memoirs and Confessions of a Justified Sinner (1824), though the Stirling/South Carolina Research Edition of the Collected Works of James Hogg (S/SC Edition) is helping to change this by making all of Hogg’s output available.

Hogg’s first literary creations were lyrics for songs, and his love and fascination for traditional tunes and songs continued throughout his literary career, resulting in his work both as a songwriter and collector. Song lyrics were included in Scottish Pastorals (1801) and subsequently in The Mountain Bard (1807); and his major song collections comprised The Forest Minstrel (1810), the First and Second Series of The Jacobite Relics of Scotland (1819 & 1821), both of which included his own songs and those by others, and his final bringing together of his most popular songs in Songs by the Ettrick Shepherd (1831). Songs also appeared in many of his other literary creations, but they were widely published beyond the realms of his own volumes too. They appeared in many independent song sheets and musical collections the length and breadth of the British Isles – and beyond – during his lifetime and even after his death.

This CD presents a very small selection of Hogg’s songs, both from these miscellaneous song sheets and from a variety of his published song collections. Some are sung unaccompanied (as was often the case in the folk tradition), and others present performances as they would have been heard in the drawing rooms of Hogg and his contemporaries.

Cover photograph of St Mary’s Loch: David Bird
Cover illustration from Iain G. Brown, Elegance and Entertainment in the New Town of Edinburgh: The Harden Drawings (Edinburgh: Rutland, 1995, 1999; new edition 2000). Used by kind permission of the Trustees of the National Library of Scotland.

This CD and the original ‘James Hogg: Research’ website were funded by a grant from the Arts and Humanities Research Council.

Sheena Wellington has travelled far and wide, singing traditional and other Scottish songs as well as her own compositions. Her relaxed singing style and entertaining presentation have endeared her to audiences across the world, and her reputation is such that she was invited to sing the Robert Burns classic (and one-time contender for the Scottish national anthem) ‘A Man’s A Man (For A’ That)’ at the opening of the new Scottish Parliament in 1999. She has recorded several albums both as a soloist (for Greentrax Recordings and Dunkeld Records) and as part of the very successful Scots Women. She has also presented a popular programme on Radio Tay and is regularly invited to speak on BBC Radio Scotland.

Kirsteen McCue is Professor of Scottish Literature at the University of Glasgow and edited James Hogg’s Songs by the Ettrick Shepherd (1831), with Janette Currie, and Contributions to Musical Collections and Miscellaneous Songs, with Currie and Megan Coyer, for the Stirling/South Carolina Research edition of The Collected works of James Hogg. She works closely on song culture in Scotland, having also published on Burns and 18th-century women’s song. She is currently part of the editorial team on the AHRC-funded project Editing Robert Burns for the 21st Century (Glasgow). Previously, she managed the Scottish Music Centre, a unique archive of music by Scottish composers of all periods, and presented a wide variety of programmes for both Radio Scotland and BBC Radio 3.

David Hamilton teaches at the Royal Conservatoire of Scotland and at the Music School of Douglas Academy. After studying in Glasgow, Germany, and the Netherlands, he has performed both as a solo recitalist and accompanist throughout Europe and in North America, Russia, and China. He has recorded with Cappella Nova and for the BBC, and for Divine Art recorded the organ works of both Dieterich Buxtehude and Bach.

‘Donald M’Donald’ was the song Hogg claimed to be his very first. It’s possibly his most famous, and he included it in three of four major song collections published during his lifetime. This musical setting was published in Edinburgh in the early 1800s by J. Hamilton of No.24 North Bridge Street, and the song sheet notes that it was ‘Written by James Hog’ [sic]. It is set to the unlikely tune ‘Woo’d an’ married an’ a’ ’ and celebrates the prowess of the Highland warriors in the light of a possible invasion by Napoleon and his troops.

‘Came ye o’er frae France’ was collected by Hogg and included in the First Series of Jacobite Relics in 1819, though Hogg notes that he believed it to be incomplete. As Murray Pittock has argued, the song ‘uses the domestic metaphor of Jacobitism to belittle the threat posed by George I’. The list of names cited in the lyric includes a number of George’s mistresses and the nicknames of several well-known Jacobites.

‘The Harp of Ossian’ appeared with a setting by English theatre composer Sir Henry Rowley Bishop in The Musical Bijou for 1829, an annual produced by the London music publisher Goulding & D’Almaine. Hogg noted that he liked this setting very much. He also chose to include the lyric in Songs by the Ettrick Shepherd in 1831, where he provided an impassioned head note bemoaning Scotland’s loss of nationhood and ‘the domination of the English’.

‘The Bonny Moorhen’ is a fragment collected by Hogg and included in the First Series of his Jacobite Relics in 1819. He claimed that he took down the song from oral tradition, from the singing of a ‘half-daft man’ called Willie Dodds. Hogg’s note explains the allegory of using the moorhen (though it probably should have been the moorcock!), whose feathers are coloured like ‘the tartans of the Clan-Stuart’.

‘O what will a’ the lads do’ (or ‘When Maggy gangs away’) appeared in Select and Rare Scot[t]ish Melodies alongside another twelve songs by Hogg with settings by Sir Henry Rowley Bishop. This volume was published in London by Goulding & D’Almaine, during 1828-9, alongside The Musical Bijou (see ‘The Harp of Ossian’). Hogg then included it in Songs by the Ettrick Shepherd in 1831. He claimed that he wrote it after hearing someone sing the first line to his little daughter Maggy. Bishop sets it to the tune ‘I’ll gae nae mair to yon toun’, which was already known with Burns’s ‘I’ll ay ca’ in by yon toun’ from Johnson’s Scots Musical Museum (no. 458) of 1796.

‘Bonny Prince Charlie’ (or ‘Cam[e] ye by Athol’) first appeared in the musical publication A Border Garland in c. 1819, with the title ‘Charlie’ to a melody by Niel Gow junior, who also most probably provided its musical setting. Like ‘The Lament of Flora McDonald’ it appeared in several miscellaneous song sheets during the 1820s and ‘30s, and was included in The Border Garland (1828). Its popularity, undoubtedly due to the combination of its jaunty melody and Hogg’s rousing call-to-arms, then encouraged Hogg to include it in Songs by the Ettrick Shepherd in 1831, even though he noted that ‘There can be no dispute that it is one of my worst’.

7. The Flowers of Scotland 1.44
Kirsteen McCue

‘The Flowers of Scotland’ was apparently written at the request of an unnamed, but ‘most beautiful young lady’. It appeared in Songs by the Ettrick Shepherd of 1831 where Hogg commented that it was created to match the tune ‘The Blue Bell[s] of Scotland’. This melody was very popular at the time, normally sung with Anne Grant’s lyric ‘Oh where, tell me where, is your Highland Laddie gone?’.

‘The Lament of Flora McDonald’ is one of Hogg’s most popular Jacobite songs, first produced as a song sheet and later included in the Second Series of his Jacobite Relics in 1821. The tune and its accompaniment were written by Niel Gow junior, who apparently told Hogg that the melody was an ‘ancient Skye air’. Hogg is said to have written new lyrics for it, even though Gow provided original Gaelic verses, and Hogg was very proud of this song, noting in 1831: ‘I could hardly believe my senses that I had made so good a song without knowing it’. Its popularity is evident in a number of independent song sheets throughout the 1820s and ’30s. It also appeared in George Thomson’s Select Melodies of Scotland (1822), in The Border Garland (1828) and in Songs by the Ettrick Shepherd in 1831 where he calls it ‘Flora Macdonald’s Farewell’.

‘Ye Jacobites by name’, one of the best known of all Jacobite songs, first appeared in James Johnson’s Scots Musical Museum of 1792 (no. 371) with lyrics written by Robert BurnsHoggHHH
. Hogg then included it in the First Series of Jacobite Relics in 1819 where he noted that the melody was very popular, but more often sung to non-Jacobite lyrics. Often performed as a rousing Jacobite song, it can be interpreted differently (as it is here) being the voice and opinions of a disappointed Jacobite.

‘The Minstrel Boy’ is Hogg’s very different alternative to Thomas Moore’s more famous ‘The Minstrel Boy to the war is gone’ which was first published with a musical setting by Sir John Stevenson in the fifth part of Moore’s A Selection of Irish Melodies in 1813. Hogg sets this lyric to the same Irish melody, ‘The Moreen’, and it appeared in the first edition of Robert Archibald Smith’s The Irish Minstrel in c.1825 before Hogg included it in his Songs by the Ettrick Shepherd in 1831.

‘Highland Harry Back Again’ first appeared in The Scots Magazine in August 1807, and thereafter Hogg included it in his 1810 collection of songs, The Forest Minstrel. It was created to celebrate the birthday of the Earl of Dalkeith, soon to be the 4th Duke of Buccleuch, to whose wife Hogg dedicated this new publication. The tune is known as ‘Highlander’s Lament’ and is often associated with Burns’s ‘My Harry was a gallant gay’ first published in James Johnson’s The Scots Musical Museum of 1790 (no.209). Hogg was known to sing this song himself.

‘Bonnie Laddie, Highland Laddie’ is the second of two versions of ‘Bonny Laddie’ written by Hogg to one of the most popular Jacobite tunes of the period. Hogg’s first lyric, beginning ‘Were ye at Drummossie Muir’, appeared in The Forest Minstrel in 1810 and later in the Second Series of Jacobite Relics in 1821. He then rewrote it for George Thomson who placed this new version with a musical setting by Ludwig van Beethoven (as performed here) in the fifth volume of his A Select Collection of Original Scottish Airs in 1818. And here it becomes a celebration of the Highland Laddie fighting at the recent Battle of Waterloo.